It was the beginning of September 2017, and the monsoons were on their way out.

I had snuck out to explore Bengaluru for a couple of weeks between classes. Staying with my friend N and her family, these were my last couple of days in the city. When she invited me to accompany her family to their hometown Tirthahalli and witness an Areca nut (Supaari) tree harvest, I jumped at the opportunity (for a long time I’d nursed a wish to intern with a farmer, but had had little opportunity staying in Delhi). What you seek finds you! 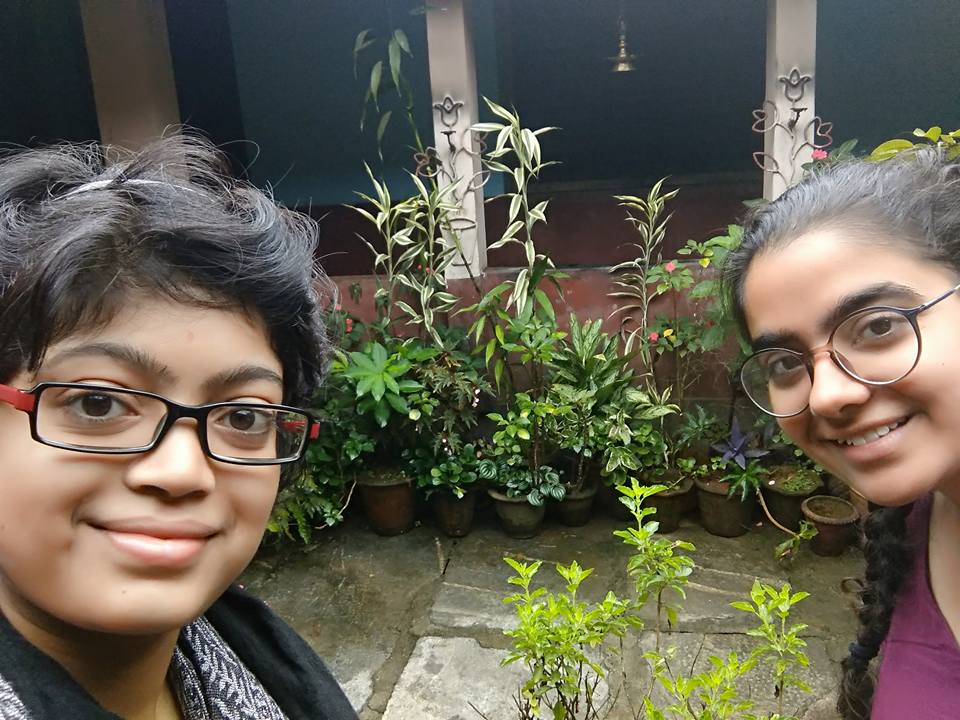 Early next morning as I shuffled past a dozen Kannada-/Konkani-speaking mostly middle-aged people into the chartered bus, all friends of N’s dad, I wondered what I’d gotten myself into – we scarcely shared a language. But they welcomed the newcomer among them so warmly that very soon I was chitchatting with gay abandon. One doesn’t need language to connect!

As our boisterous group made its way through the forests, fields, towns, villages, I could scarcely peel my eyes from the rain-drenched trees and paddy fields. Wherever one looked, there was yet another fluorescent green. Tirthahalli is a small quaint agricultural town towards the west coast of Karnataka on the banks of the river Tungabhadra. Free and far from the hustle-bustle of a city, it is an idyllic place surrounded by dense forests of the western ghats. Passing the vast river, it was well past dusk when we reached our host’s place. They were relatives of my friend and their ample yet warm house felt like it belonged to someone who cared a hoot about the trappings and flashiness of modern urban life.

At dinner (on fresh banana leaves), it was revealed that areca nut harvest happens in December. However since we were there,we could join a rice transplantation activity instead, which was in full swing. I was partly disappointed as I had looked forward to seeing someone swing like Mowgli from high tree to high tree! But what awaited us was equally new, and perhaps even more exciting as I would be experiencing the process hands-on than just being a witness. Win again!

The next morning we woke up to the sound of cocks crowing – another novelty for the city-bred girl. I must admit though that it was a pretty annoying sound, like an alarm that refuses to be snoozed. However the cool morning breeze swaying the rain-drenched branches of the trees visible through the window had me literally jump out of bed in excitement.

A short tractor ride to the fields informed me that our hosts were a very landed people. Touring acre upon acres of bright green fields hedged by an orchard of fruit and tamarind trees on one side, I wondered how it must feel eating food you grew yourself everyday. Maybe I’d name all my trees all kinds of funny names you can’t give to people! Cuz why not.

Breakfast sprang another surprise – idli cooked in jackfruit leaves called Khotto (Konkani) or Kotte Kadubu (Kannada). This is how it’s made: a little packet of four leaves is sewn together into a tetrahedron of sorts with twigs. Idli batter is poured in and the leaf packet is bound close with cotton thread before steaming as usual. When I was served these little leaf packages on my plate, I was clueless what to do with it till Niha’s sister showed me how to open it to get to the Idli within. This may be dramatic, but I felt like a beach tourist discovering a pearl within the odd oyster. My fascination with the Khotto remains intact. 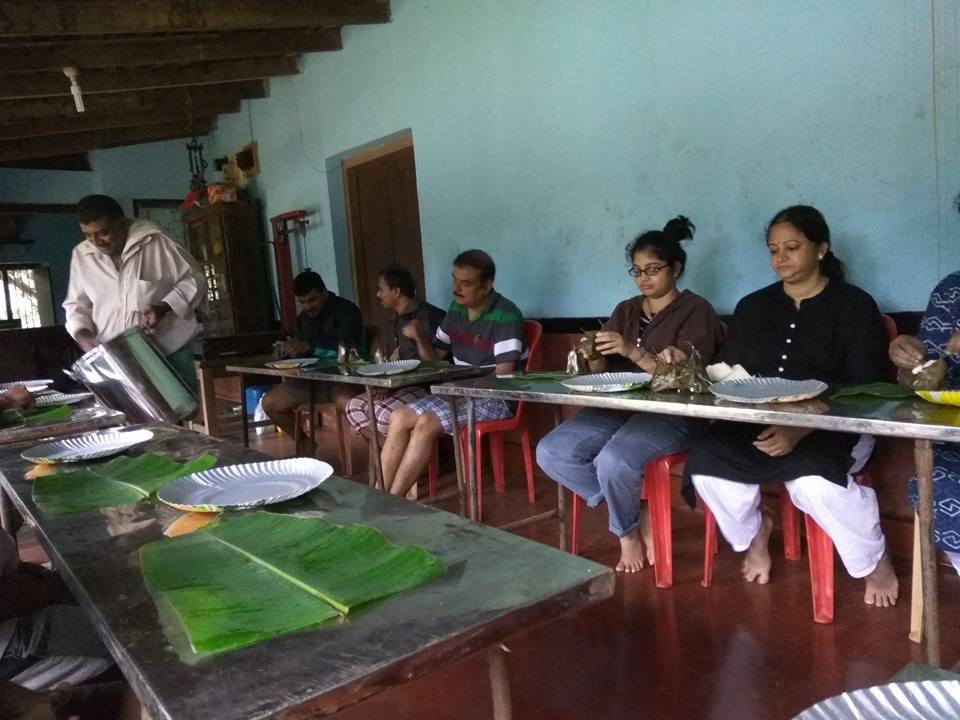 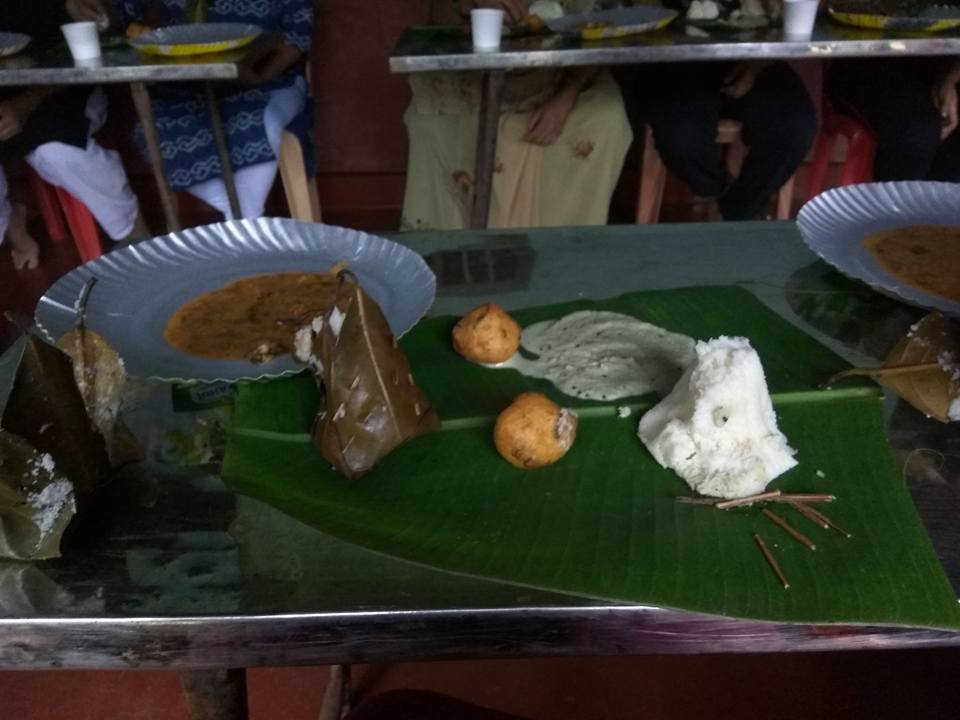 Work was already underway when we reached the fields.  Some men were busy ploughing the fields with a motorised plough machine while at another end one saw several women hunched over sowing little bunches of paddy saplings at uniform distances. When rice seeds are sown, not all of them germinate and take root. So they are randomly sown at first. 25-27 days later when the little plants are about half a foot tall, they are uprooted and gathered into bunches for replanting in neat rows. This way each sapling gets optimum space and resources to grow as much as it can. However this also makes paddy cultivation a very labour-intensive and expensive affair for farmers. Every time I get rice to eat, I’m reminded of the immense effort gone into producing it and can no longer let it go waste!

Somewhat surprisingly, most of this hard labour is borne by women even though they are paid less than their male counterparts. Sometimes they are not paid at all when the menfolk rope in their mothers, wives, sisters, or daughters to help in the harvest. It is backbreaking work being hunched over 8-10 hrs a day in the scorching sun. Yet it is still the women who are expected to go home and provide food and manage other household chores for the family, in their bone-tired state. This patriarchal practice is so ingrained, anybody hardly ever questions it. Yet the women went about their work throughout the day, cheerful as larks. It makes me wonder whether ignorance (of their rights) really is bliss. Even if it is, isn’t it unfair to society to block half the population’s potential by treating them as mere workhorses, when they can be so much more?

I suppose they usually sang ditties as they deftly sowed one bunch after another, but this time they had another source of entertainment at hand – a clueless bunch of cityfolk excited to do hard labour without being paid for it! Surely, we must be a mad bunch! As we clumsily followed their instructions, the women kept a sharp eye on us and would rush over to correct us if we did or hold things the ‘wrong’ way. Even though I could scarcely understand their conversation, their excitement was palpable as they frequently nudged each other, winked and broke out in laughter at our expense. Hoity toity city folks getting down and dirty in the mud must be amusing indeed. As we tried our hand at (and got a hang of) the replanting activity, Niha and her sister answered questions directed at me as I had no language in common with the curious local women. Within a few minutes, the news had travelled to all corners of the labouring group that someone had travelled all the way from Delhi for just this. The awe with which they regarded me then did not escape my notice. But it was only later that I got to know the women had also taken me for an actress. A couple of them even swore they had seen me on TV!

As we gave up after a few hours from the tiredness and eventually enjoyed a hearty lunch with the labouring men and women, I remember how intensely I noticed the lines and freckles on each face and saw the raw beauty that surrounded me then. I wanted to sear these memories in my head for eternity – the wonderful people, the fields, the colours, the breeze, the sounds and the rays of the sun, but I was too busy soaking it all in, standing knee-deep in wet sloshy mud at the time to think of anything else. No pictures got taken. But I lived that time to it’s fullest best.

Books to Nirbhao
Previous Article
Other things to do while in a Gurudwara!
Next Article 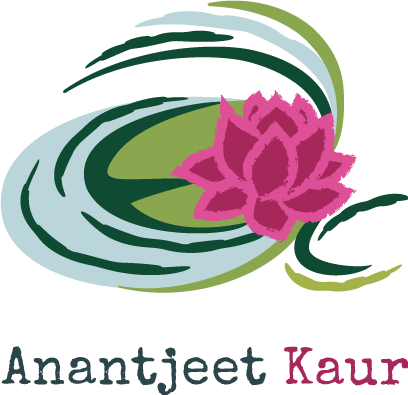